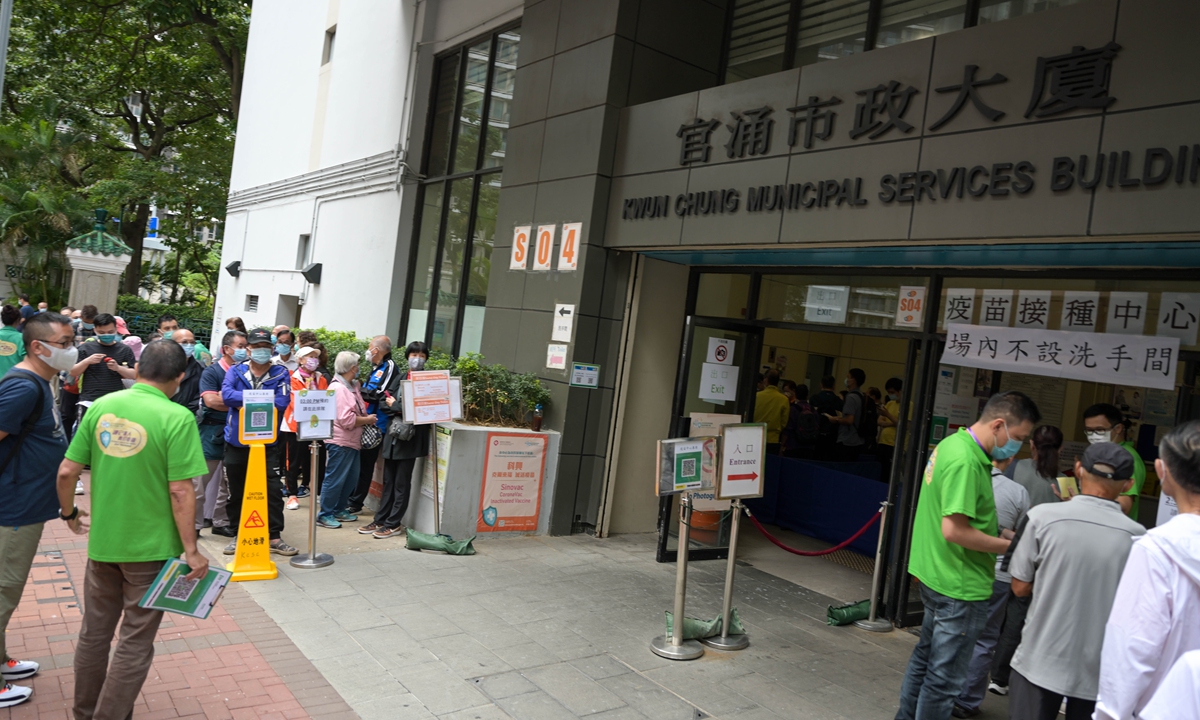 The central government dispatched a delegation of epidemic prevention and control experts to the Hong Kong Special Administrative Region (HKSAR) on Saturday, which could be the last step towards resuming quarantine-free travel between mainland China and Hong Kong. , observers said.

On Saturday, the delegation arrived in Hong Kong for a four-day visit to learn about the city’s anti-epidemic efforts and measures, according to a press release from the Hong Kong SAR government. Experts will visit local institutions and facilities related to anti-epidemic work and meet relevant staff to exchange views and share experiences.

On Sunday afternoon, the delegation inspected Hong Kong International Airport, one of the most important parts of the city’s epidemic prevention system.

Accompanied by officials from the Food and Health Bureau and the City’s Health Protection Center, the delegation was notified upon arrival at the airport and then visited the Departures and Arrivals Hall. to inspect epidemic prevention efforts.

The delegation includes epidemic prevention and control experts from the National Health Commission, Shenzhen and Zhuhai in Guangdong province (southern China). The Hong Kong and Macao Affairs Office of the State Council and the Liaison Office of the Central People’s Government of the Hong Kong SAR are also represented.

The delegation’s visit is an important follow-up to the meeting on the mainland and Hong Kong’s anti-epidemic work on September 26 and the video-conference exchange between them on November 2, according to the Hong Kong SAR government.

Experts told the Global Times that the delegation’s visit could be the last step towards resuming non-quarantine travel between the mainland and Hong Kong, which is expected to take place as early as early December.

“As students from mainland China studying in Hong Kong, we look forward to the resumption of non-quarantine travel, which will bring a high level of comfort,” a Polytechnic University student said on Sunday. from Hong Kong, Ma, to the Global Times. . “As far as I know, many Hong Kong residents have similar wishes.”

“Hong Kong has met all the standards in terms of preventing epidemics to open up to the mainland,” Jin Dongyan, professor of biomedicine at the University of Hong Kong, told the Global Times on Sunday, noting that only a few cases had been confirmed in the past. two months.

“The Hong Kong SAR government will continue to work towards the goal of zero infections and firmly guard against the importation of cases and the resurgence of local infections,” John Lee, chief government secretary said on Saturday. of the Hong Kong SAR.

With Hong Kong’s status as an important international hub, it neither could nor need to copy the entire anti-epidemic experience of the mainland, Jin noted.

“Resuming travel without quarantine is a matter of mutual respect and trust in each other’s system,” said Jin. “It is also about putting in place corresponding risk control mechanisms, including merger mechanisms that will be triggered by the reporting of a number of locally transmitted cases.”

“Hong Kong has yet to demonstrate that it can control and track potential cases imported from abroad with its prevention mechanism more lenient than the mainland,” said Kennedy Wong Ying-ho, a Hong Kong-based member of the National Committee. of the policy of the Chinese people. Consultative conference, the Global Times said on Sunday.

“Hong Kong’s vaccination rate [less than 70 percent] also needs to be further improved, something the Hong Kong SAR government could work on. “

People can no longer travel freely without quarantine between the mainland and Hong Kong since January 2020.

“It is excellent news that the central government sent the delegation,” Tam Yiu-chung, a member of the Hong Kong-based National People’s Congress Standing Committee, told Global Times. “If the delegation makes any recommendations and suggestions, I hope the Hong Kong SAR government will implement them as soon as possible.

The initial phase of non-quarantine travel may have a quota, and the Hong Kong SAR government should plan well in advance to avoid chaos after the application process begins, so as not to deter the public, said Tam.

Hong Kong has made intensive efforts to comply with the mainland’s epidemic prevention requirements to boost the resumption of non-quarantine travel.

In September, Hong Kong announced a lifting of the mandatory quarantine for travelers from low-risk areas on the mainland to the city.

In addition, Hong Kong Airport manages the separation of people arriving from the mainland and international flights. The city has also set up a health code mechanism similar to that of the metropolis. In November, Hong Kong tightened its quarantine exemption provisions, stopping allowing travelers from many countries to enter the city without quarantine.

Hong Kong has advantages as a gateway to the mainland, and if the staff of companies established in Hong Kong cannot travel to the mainland, it “will greatly diminish Hong Kong’s status as an international commercial and financial center.” , said Carrie Lam, Executive Director. Hong Kong SAR on October 26.

“Although Hong Kong appears to be recovering economically, many of its industries are isolated from the mainland, which poses great risks,” Wong said. “The eventual re-establishment of non-quarantine travel is inevitable for Hong Kong and will help it better integrate into the country’s development picture.”