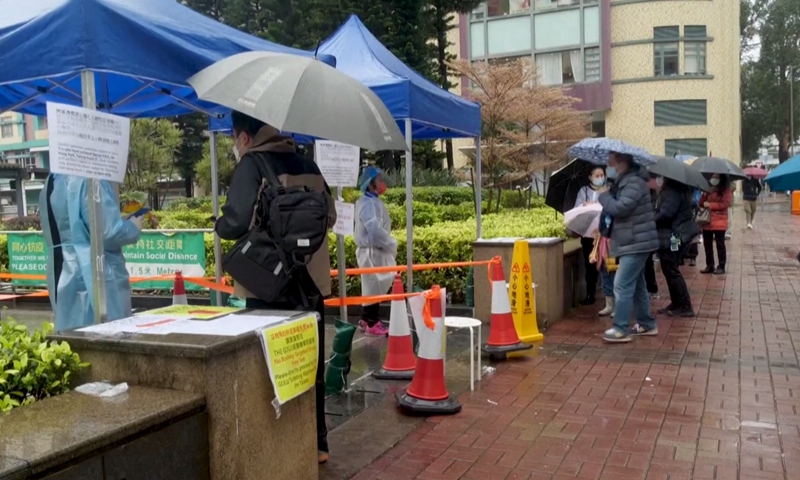 Experts from the National Health Commission (NHC) on Friday held a video conference with Hong Kong experts and officials to share their experiences in dealing with COVID-19 cases as new daily cases topped 10,000 in Hong Kong Special Administrative Region for the first time that day.

More than 20 people, including officials from the NHC, the Hong Kong Food and Environmental Hygiene Department and the Hospital Authority, as well as experts from both sides attended the conference. Mainland experts shared their strategy and methods for dealing with severe cases and special groups with their Hong Kong counterparts, noting that they would provide full support to help Hong Kong fight the epidemic and treat the case, China Central Television (CCTV) reported.

Hong Kong experts discussed the situation in Hong Kong during the fifth wave of the epidemic and said they would like to borrow from the mainland’s experiences, according to CCTV.

Hong Kong reported 10,010 new confirmed cases and 47 new deaths on Friday. The day before, local authorities revealed that the total number of positive cases in the fifth wave of the outbreak in the city had exceeded 60,000 and there were no signs of slowing down yet.

Ho Pak-leung, an infectious disease expert from the University of Hong Kong, told media he estimated around 200,000 Hong Kong residents were likely infected in the past four weeks. The cases that had been discovered and reported represented only a third of them

Ho urged Hong Kong residents to get vaccinated as soon as possible. He also suggested the Hong Kong government should seek mainland support if the former could not mobilize local private medical institutes to help fight the epidemic.

The epidemic not only placed a heavy burden on the city’s medical system, but also severely damaged the local economy.

Hong Kong Finance Secretary Paul Chan Mo-po said the local economy performed poorly in the first quarter and there was even a possibility of seeing negative growth, and the outbreak could be brought under control in two at three months.

Chan said he expects Hong Kong’s economy to improve in the second half and non-isolation travel between the city and the mainland could resume in the second or third quarter. It is even possible to resume international travel this year after the increase in the local vaccination rate.

Based on previous Omicron-dominated outbreaks in South Africa, the United States, the United Kingdom and Japan, Zhuang Shilihe, an expert based in Guangzhou, told the Global Times on Friday that it is possible that the outbreak in Hong Kong can be brought under control in about two months.

Hong Kong’s neighboring province of Gungdong in southern China has sent two teams of experts to the city. The central government is also helping the city build four makeshift Fangcang hospitals in Tsing Yi, Yuen Long and Hung Shui Kiu, which are expected to provide 14,000 to 17,000 quarantine places for Hong Kong residents. That of Tsing Yi would be commissioned within a week.

“We are not able to receive all the patients as the size of our quarantine facilities could not match the growth rate of new infections. But with the strong support of the central government, I am confident of overcoming this crisis,” he said. said Fan Hung-ling. , chairman of the Hong Kong Hospital Authority, told the Global Times in a previous interview.

Media reported that Guangdong is also organizing a third Hong Kong support team of more than 1,000 people, most of whom are nucleic acid testing personnel.