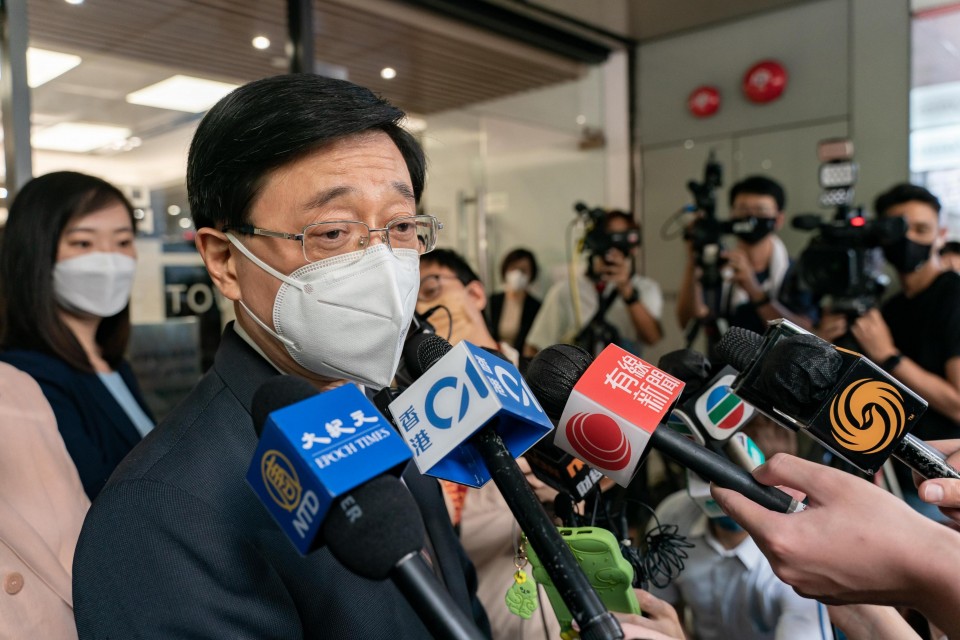 Former Hong Kong government No. 2 John Lee has virtually won the city’s leadership election scheduled for May 8 after winning nominations by a majority of election committee members who will vote, without any other contender.

Lee, a security hardliner and Beijing’s favorite candidate, is set to rule the city under even tighter control as he pledges to enact a previously shelved treason bill. and stealing state secrets that have not been criminalized by national security law. imposed by Beijing in 2020.

John Lee speaks to reporters after meeting with members of the Democratic Alliance for the Betterment and Progress of Hong Kong on April 11, 2022 in Hong Kong. (Getty/Kyodo)

The staunch supporter of the law, which was enforced to suppress dissent in Hong Kong following an anti-government protest in 2019, tendered his resignation as chief administrative secretary, the second-highest post , April 6 to stand for election. .

His resignation was approved by China’s State Council a day later, a swift turnaround seen as a sign of Beijing’s strong support for Lee’s candidacy.

While Lee received 786 nominations from the 1,454-member election committee made up mostly of pro-Beijing members, he is seen winning the election and becoming the first Hong Kong leader to rise through the ranks of the police force.

Before becoming second-in-command, Lee served as security secretary during a crackdown on pro-democracy newspaper Apple Daily, which folded on June 24, 2021. A day after the newspaper closed, Lee was promoted at station No. 2. .

The 64-year-old also led the police response to large-scale protests during the 2019 anti-government movement as a senior security official.

Some pro-democracy activists and analysts believe Beijing’s support for Lee signifies a further tightening of China’s grip on the territory alongside a shift to national security first.

“Hong Kong has been a police state for two years,” Samuel Bickett, an American lawyer and Hong Kong expat who was deported earlier this year for allegedly assaulting a police officer, said on Twitter:

“John Lee, not Carrie Lam, has been the supreme power in this police state at least since he became Chief Secretary in June 2021. His elevation is expected. We can probably expect more of the same, not to a major policy change,” he said.

Kenneth Chan, an associate professor in the department of government and international studies at Hong Kong Baptist University, told Kyodo News that current leader Carrie Lam “dealed fatal blows to the city,” namely the app. of the National Security Act and pro-democracy arrests. activists and the media as well as an overhaul of the electoral system imposed by Beijing to ensure that only “patriots” rule the city.

“Lee would proceed with the ‘continentalization’ she undertook in the second half of her term, in a more aggressive and sweeping way,” he said.

Among Lee’s list of priorities as next leader is the treason and theft of state secrets bill, as he told reporters earlier this month.

The bill was sought under Article 23 of the Basic Law, Hong Kong’s mini-constitution, which requires the city government to enact laws prohibiting seven offences, including secession, subversion, treason and stealing state secrets.

The National Security Law criminalizes secession, subversion, terrorism, and collusion with foreign forces, but not treason or theft of state secrets.

Lee called enacting the legislation based on Section 23 a “constitutional duty”, adding that it would bring stability, according to local media.

However, Chan says focusing on legislation is what Lee needs to do to “show Beijing that he’s the right man for the job.”

“The broadening and deepening of the assault on Hong Kong’s core values” such as freedom, human rights and democracy cannot be ruled out, Chan added.

While the former police officer’s disciplinary record could help bolster security in the territory, Lee’s candidacy has also raised concerns about the future of Hong Kong’s economy.

In response to questions about his lack of experience in business and financial affairs, Lee said that “there is no one who knows everything for everything”, pledging to form a team with experienced leaders to work on economic policies.

The city had once promised itself a high degree of autonomy with the “Hong Kong people ruling Hong Kong”, with the ultimate goal of achieving full universal suffrage under the Basic Law.

Barring unforeseen circumstances, Lee will be sworn in for his five-year term on July 1, the 25th anniversary of Hong Kong’s handover from Britain to China and halfway through Hong Kong’s “one country, two systems” policy. Beijing which was set up in 1997 and was to last 50 years until 2047.

In 2017, Lam’s emergence as the new leader with 777 votes on the then 1,194-member election committee created an outcry as hundreds of pro-democracy protesters took to the streets to protest the election. in a small circle.

Its successor, however, is unlikely to meet the same fanfare.

With the enactment of the National Security Law threatening a maximum sentence of life imprisonment, the streets of Hong Kong are expected to remain calm during the transition to Lee’s security-focused leadership, which Chan said would facilitate Beijing’s overall control over the territory.

“(Lee) is not invited or expected to think and act independently for Hong Kong,” Chan said. “The city’s economy and decisions will be decided in accordance with Beijing’s priorities and requirements.”