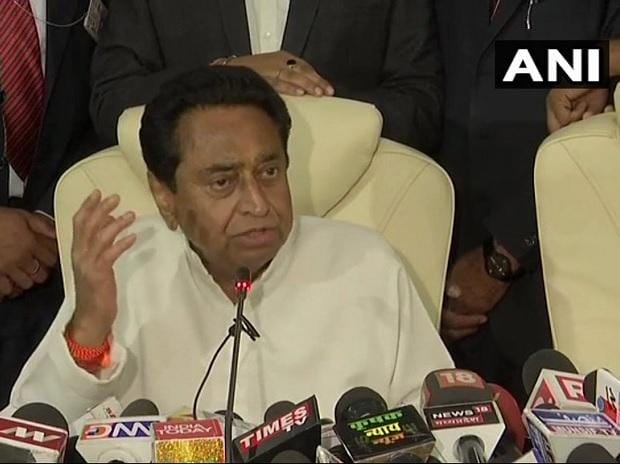 
A meeting of the Congress Legislative Party is to be held in the presence of All India Congress Committees (AICC) observer Kamal Nath amid deepening political crisis in Maharashtra.

Kamal Nath has arrived at the residence of PLC leader and minister Balasaheb Thorat. 43 MPs will attend the meeting, Maharashtra Congress sources said on Wednesday.

The Congress has delegated its top leader and former Chief Minister of Madhya Pradesh, Kamal Nath, as an All India Congress Committee (AICC) observer in the state.

Kamal Nath arrived in Mumbai late at night and he will hold an important meeting with MPs from Maharashtra Congress today.

This meeting must be held at the official bungalow of Balasaheb Thorat at 11:00 a.m.

Reportedly, out of a total of 44 Maharashtra Congress MPs, 43 MPs will attend this meeting. 42 MPs were present at the Congressional Legislative Party meeting held last night.

According to party sources, Minister Vijay Wadettiwar was not at the meeting held last night as he was out of the country, and another MP was unable to reach Mumbai from Chandrapur.

But in today’s meeting, Chandrapur MLA Subhash Dhote will also be present.

It is likely that after meeting with Congress MPs, Kamal Nath and other senior Congress leaders will also meet with Chief Minister Uddhav Thackeray.

Earlier on Tuesday, Maharashtra Congress MPs held a meeting at the residence of Legislative Party leader Balasaheb Thorat in Mumbai.

The meeting was chaired by Maharashtra Congress official HK Patil. At the meeting, 42 of the 44 Congress MPs were present, along with party leaders Nana Patole, Ashok Chavan and others.

Meanwhile, 33 Shiv Sena and seven independent MPs, led by rebel party leader and Maharashtra Cabinet Minister Eknath Shinde, arrived at a luxury hotel in Guwahati, BJP-run Assam on Wednesday. The Shiv Sena revolt has given rise to speculation that Shinde and other MPs may join the BJP in a bid to overthrow the MVA government.

MPs are now staying at the city’s Radisson Blu Hotel. “A total of 40 deputies are present here. We will carry the Hindutva of Balasaheb Thackeray,” Shinde said after arriving in Guwahati.

The developments came after a suspected cross-vote in the Maharashtra Legislative Council (MLC) elections in which the Bharatiya Janata Party (BJP) won five seats, in a blow to the MVA alliance government. NCP and Shiv Sena won two each while Congress was able to clinch one of the 10 total Legislative Council seats that went to the polls on Monday.

After the MLC elections, Shinde and other Shiv Sena MPs were staying at Le Meridien Hotel in Surat. A Shiv Sena delegation including close aides of Chief Minister Uddhav Thackeray, Milind Narvekar and Ravindra Phatak, had also met with Shinde and other party lawmakers in Surat.

Alleging that efforts are being made to overthrow the MVA government, Shiv Sena MP Sanjay Raut confirmed on Tuesday that some Shiv Sena MPs and Eknath Shinde are currently “unreachable”. He said Shiv Sena MPs were in Surat and they were not allowed to leave.

Maharashtra BJP leader Chandrakant Patil, however, said his party would “definitely consider” a proposal if it came from Shinde to form an alternative government.

Amid the drama, Shinde launched a veiled investigation into Shiv Sena for joining Congress and the NCP to form the state government and tweeted, “We are the devout Shiv Sainiks of Balasaheb…Balasaheb we taught the Hindutva We never have and we will never cheat for power regarding the thoughts of Balasaheb and the teachings of the Dharmaveer Anand Dighe Saheb.

Shinde also deleted “Shiv Sena” from his Twitter bio. He was instrumental in building up organization in the Thane region and was appointed Leader of the Opposition in the Maharashtra Legislative Assembly in 2014 after the Shiv Sena split from the BJP. Shinde was appointed cabinet minister in the MVA government.

However, sources said Shinde has felt left out since forming the MVA government. His son Shrikant Shinde represents the seat of Kalyan Lok Sabha. Amidst these developments, Shiv Sena leaders met with Deputy Speaker of Maharashtra Assembly Narhari Zirwal and handed him a letter asking to remove Eknath Shinde as Legislative Party Leader and replace him with Ajay Chaudhary. as Shiv Sena Legislative Party Leader.

Shiv Sena’s Sanjay Raut claimed the rebellion was engineered by the BJP to overthrow the ruling MVA alliance, a claim denied by the BJP.

Maharashtra BJP leader Chandrakant Patil has claimed that “technically” the state government is in a “minority” as Eknath Shinde and other Shiv Sena MPs have left. He said the BJP was currently in a “wait and watch” mode and added that there were no proposals regarding the formation of the government either from the BJP or from Shinde.

“The BJP won the support of independents and small political parties for the Rajya Sabha and MLC elections. According to our information, Eknath Shinde and 35 MPs left. This technically means that the state government is in the minority, but in practice it will take some time for the government to be in a minority,” he said.

“It is too early to say anything, we are currently waiting and keeping an eye on the situation. So far, there has been no proposal regarding the formation of government neither BJP nor Eknath Shinde but anything can happen in politics at any time,” the BJP leader added.

The BJP and the Shiv Sena were allies until 2019 when, after contesting Maharashtra Assembly elections, the two parted ways over the issue of the chief minister post. After days of political stalemate and high-tension drama, the Shiv Sena finally formed the government with Congress and the NCP, with Chief Minister Uddhav Thackeray heading the Maha Vikas Aghadi alliance government.

(Only the title and image of this report may have been edited by Business Standard staff; the rest of the content is auto-generated from a syndicated feed.)

AM Best confirms the credit ratings of The People’s Insurance Company of China (Hong Kong), Limited