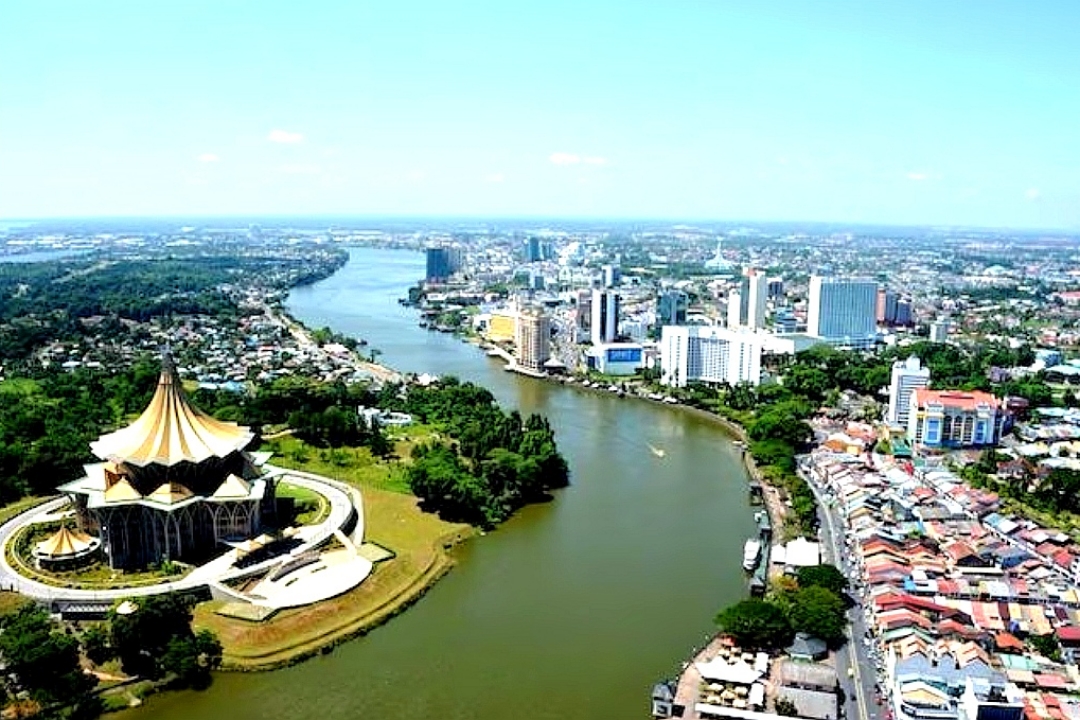 A file photo shows a drone view of the Kuching waterfront along the Sarawak River.

I have always been amazed, fascinated and surprised by the many similarities and differences between the two great cities located in Malaysian Borneo – they are models of what idyllic tropical paradises are for those who reside in these two abodes of peace, as well as two of the most attractive destinations for tourists worldwide.

To this day, I still encounter on my travels in any town on the peninsula and also in the city-state of Singapore the many taxi drivers and casual acquaintances taking Sarawak for Sabah (one way or another). ‘another never the other way around), and also that they would refer to our beloved ‘midin’ fern as a Sabah vegetable!

I had first visited Kota Kinabalu (KK) in 1971 when I was 21 – at that time Sabah was better developed and more progressive and was indeed more advanced than Sarawak in many ways. The cost of living was also higher, by at least 25%; one would find out very quickly that food and drink were much more expensive in KK.

Also in terms of population, there were more people and there was a lot more economic activity and development there – even the nightlife seemed more exciting than in Kuching.

It had seemed to me that KK was taking advantage of the “winds of progress” of economic success and influence from Hong Kong (there were already direct flights at the time), and there was the Filipino influence from the neighboring Philippines , as well as that of the neighboring Indonesian state of Kalimantan; indeed, its easternmost city of Tawau had Tarakan as a major border link.

Mabul Island, off the east coast of Sabah, is a diver’s paradise.

Sabah, in general, was more Cantonese/Hakka speaking with respect to its main Chinese population, while Sarawak was more Hokkien, Teochew and Hakka, with Foochow in the central region. The timber boom of the late 1960s that continued into the 1990s greatly prospered Sabah.

It had seemed to many that its political leaders were more flamboyant and ready and willing to wield their vast powers and influence, whereas in Sarawak’s then more “tame and stable” politics, we were the silent and more conservative brother. We would see changes in the seats of political power with every state election, whereas in Sarawak, aside from the brief turmoil of the Ming Court affair, we were stable and secure.

My earliest memory of the difference between KK and Kuching was during our daily forays for food. At breakfast, the majority of cafes in KK offered a very specialized choice of food, usually only one type – if the shop offered ‘ngiu chap’ (beef broth), that’s just that; or fish/seafood with noodles, it’s just that – and the list goes on.

Most of the food was pretty good, delicious in quality and quantity, and prices didn’t seem to be a concern – often a bowl of seafood tomyam could cost almost twice as much as a bowl of Kuching noodle soup.

Due to KK’s proximity to the sea and their abundance of fresh seafood and a wide variety of seafood, their quality has always been excellent and the cooking styles of their chefs are very different from those of Kuching.

In Kuching you will find instead of specialized kopitiams offering a specialty, a selection – usually in a cafe there would be a minimum of two and a maximum of five or six stalls (nowadays the trend after the early years 2000 was to build even larger food courts with a dozen or more different stalls run by a beverage supplier who is usually the owner/store owner).

On offer, a visitor will find almost the same type of breakfast/brunch at every kopitiam – the essential ‘kolo mee’ (also serving choices of kuih tiaw, bihun and wanton); Kuching laksa, and either chicken rice, porridge, kuih chap, a Foochow specialty, and/or nyonya kuih-kuih.

What also amazes many visitors to Peninsular Malaysia would be the presence of Malaysian halal stalls selling satay, mee jawa, mee goreng, nasi lemak and other halal foods.

Sometimes, due to space constraints, the stall may even be located right next to a non-halal stall selling non-halal food.

Another shocking experience for these visitors would be the sight of Muslim customers happily seated together (if the seating arrangement is so arranged) with others, enjoying drinks served by the same drink maker in the back of the store.

Probably the biggest differences in foods available between KK and Kuching are the availability of dim sums (a Cantonese word for “touching the heart” – these are small portions of snacks) and the variety of bakut-teh (Hokkien word for ‘meat bone tea’ – pork chops simmered in a broth of herbs and spices).

I was told that due to its influence from Hong Kong and Kuala Lumpur (KL) (both places have large Cantonese populations), dim sum is important in KK as breakfast and lunch, and it There are many outlets offering some of the best dim sum you can find anywhere in this part of the world.

In Kuching, I can count on one side the number of so-called dim sum places, which my favorite has stopped serving since losing its dim sum chef a few months ago.

A few others that remain are just like that.

With bakut-teh, the variation offered in KK is closer to the lighter, more peppery Singapore Hokkien version, which I personally love. The ones offered in Kuching are the heavier, darker and grassier Klang and KL versions. Not my cup of tea!

So much for the food!

I consider KK my second home, having traveled back and forth and worked there sporadically since the 1970s. I love it for its many differences from Kuching – its many attractions, beautiful places to visit, different activities to do and over the years I have met and made many good friends there. My wife’s family members have been living there since the 1970s and have made it their home.

Where Kuching is calm, serene, peaceful and a bit quiet, mellow and rather unexciting, especially in its nightlife, KK in my opinion tends to be livelier, a bit chaotic, seems more edgy (and dangerous?) with its bright lights and roaring nightlife.

If Kuching could be compared to a middle-aged man in some kind of regular civil servant, KK for me is a single woman in her mid-40s leading a swinging lifestyle and having fun like never before!

By day, Kuching would be a stroll through the Stutong Family Park, a visit to the Museum of Borneo Cultures, shopping along the archaic downtown lanes filled with antique shops and quaint old places, drinking Kopi-O and eating delicious food along Carpenter Street and Padungan, ending with a quiet evening with friends at the Sarawak Club or at a friendly bistro like Junk or Zinc after dining at a restaurant like the Heritage or The Venue.

The free-spirited reveler frequented the new pubs and bars of Saradise and Galacity or elsewhere of a handful of high-end bistros and nightclubs dotted around the city, probably ending the night with a simple supper at Lau-Ya Keng or the Open Air for late bites.

KK definitely has more to offer visitors – the next day a wide and varied choice of restaurants of almost everything from great seafood dishes to delicious beef and other meats (and great Indian food too) one could expect to visit a nearby island for the day (boats are easy to find and trips are frequent), climb the splendid Mount Kinabalu or take a trip to Kundasang, or a road trip to Kuala Penyu or to buy duty-free goods in Labuan (prepare for a 2 hour road trip and 1.5 hour ferry ride), or you can take the ferry direct from the town pier.

You can also visit the local Filipino market, check out a mini-zoo or take a trip to one of the small outlying roadside towns (these too are plentiful in Kuching).

The small town of Siniawan near Kuching – a foodie’s paradise on weekend evenings.

At night, KK takes on a life of its own – there’s the excitement of the KK Waterfront; we have that in Kuching, but there really is no comparison as KK is vibrant, filled with people of all races and walks of life.

It offers all varieties of food and drink, and if you’re more adventurous or have the cash to burn, there are the upscale bistros and pubs that line the road leading into town.

There are also nightclubs and entertainment venues – just ask and you’ll find pretty much anything your heart desires.

I have found that over the years and my long periods of residence there, there is generally a greater sense of adventure at KK, much stronger purchasing power and I can say that he typical Sabahan tends to spend more and therefore enjoys a more lavish lifestyle than his Sarawakian counterpart in Kuching.

Kuching people seem to be more reserved, very conservative and unwilling to let go – most tend to be more generous with themselves only when traveling outside their home base.

There is something that unites them – the people of Sabah and Sarawak are all very attached to their connection to each other as “Malaysians of Borneo”, and do not appreciate being taken for granted or considered as “second-class citizens” by Malaysians. through the water.

They would unite to oppose any oversights, alleged insults, or other derogatory treatment by anyone else.

They are proud and exceptional citizens: Malays, Chinese, Iban, Kadazan, Indian, Eurasian or any other race – and being considered Malaysians of Sabah or Sarawak descent.

Why this still needs to be reminded should no longer be the case!

Snowball crisis at Evergrande, the most indebted developer in the world