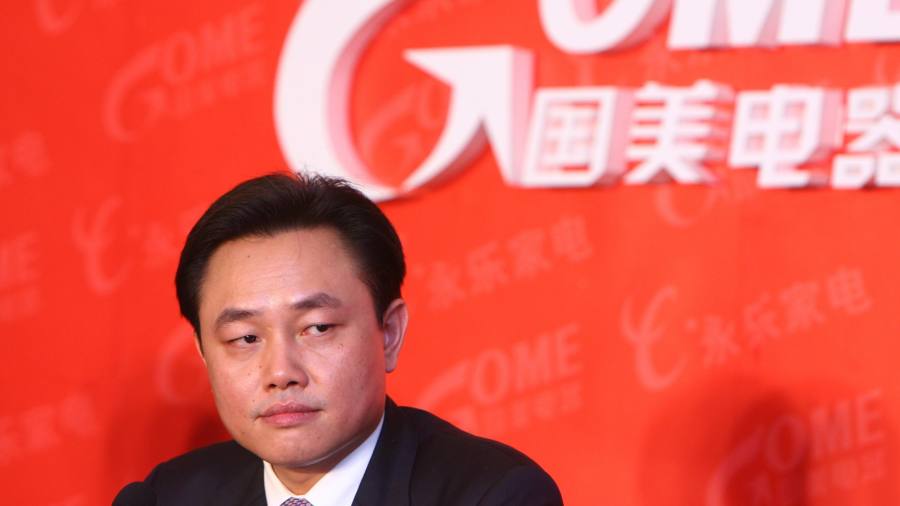 Huang Guangyu, the founder of retailer Gome and once China’s richest man, had pledged to revive his electronics empire after winning an early release from prison in 2020 for insider trading and bribery.

But as he served his 14-year sentence, China’s retail landscape changed irrevocably, with e-commerce titans Alibaba and JD.com becoming dominant in the market and growth in the world’s second-largest economy slowing.

Huang, who owns a 53% stake, is now fighting to keep his company solvent. Gome posted five consecutive years of losses and ended 2021 with a deficit of Rmb 4.4 billion ($642 million), plus the same amount remaining in cash. Its EY auditors resigned last November over a pay dispute and, as the retailer closes its stores, staff said they had not been paid for months.

Gome shares have fallen 70% over the past year to HK$0.25 per share. Trading was suspended in July and only resumed on Monday, when the company announced plans to buy a number of power malls, without disclosing the cost of the deal.

But the last-minute maneuver might be too late for Huang. “Gome’s indecisive business strategy has led to internal fatigue within the company,” said Mo Daiqing, senior analyst at Hangzhou-based China E-commerce Research Center, a consultancy. “His retail journey is headed for failure.”

Gome was part of a wave of retailers that benefited from the rise of China’s middle class during years of meteoric economic growth. Huang, who went from selling electronics on the streets to building a $6 billion fortune, was once one of China’s hottest entrepreneurs.

His business turmoil also comes in the wake of President Xi Jinping’s ‘common prosperity’ crackdown, which hit top entrepreneurs such as Alibaba’s Jack Ma, and as China’s economy stumbles at following harsh closures amid the coronavirus pandemic and a real estate crisis.

In 2012, Suning was China’s largest retail chain by sales according to the China Chain Store & Franchise Association, while Gome ranked third. In these better times for physical stores, Suning owner Zhang Jindong became a multi-billionaire and bought Italian football club Inter Milan in 2016.

“Sometimes we didn’t necessarily need to buy anything. We were just there window shopping in cool and trendy consumer electronics,” said Li, a 52-year-old shopper who lives in the eastern province of Jiangsu. “But I gradually turned to e-commerce sites in the early 2010s when I got my e-bank account.”

Gome himself launched his first online shopping site in February 2003, before Alibaba’s consumer-focused Taobao website went live in May of the same year and JD.com founded its online retail platform in January 2004. But Gome was still focused on physical stores and underinvestment. in the online infrastructure led to a drop in sales.

At the start of this year, its e-commerce app Zhenkuaile had 70 million monthly active users, according to company figures, compared to Taobao’s 483 million, according to Statista.

The deterioration of the business accelerated over the summer. A HK$776.46 million ($99 million) equity placement in June to raise funds for debt payments and expand its online platforms sent the stock price plummeting.

Gome told the Financial Times in a statement that he would close up to 35% of his stores by October to save up to Rmb 1.5 billion. Employees complained in interviews that they were owed salaries and risked losing their jobs.

An employee of Dabanjia, Gome’s interior design unit who was pregnant, told the FT she lost her job in late June when the company’s headquarters in Tianjin closed. The worker, who did not wish to be named, claimed she owed three months’ salary and was not given any notice or compensation as required by Chinese law.

“HR told us the company was out of money and just asked us to leave, saying if you weren’t happy you could go to arbitration,” she said. . “I have worked for the company for over six years. It’s such a sad ending.

Dabanjia’s founder, general manager and vice chairman all resigned in July, while Zhenkuaile also downsized, according to two former employees.

In response, Gome said it was going through a “strategic adjustment” process and that its human resources processes were in compliance with the law. He said the business was “running normally” and the salaries of “more than 100,000 employees have been paid”.

The outlook for rival Suning is equally bleak. Its stock has fallen by more than 60% in the past year and it recorded a loss of Rmb 44.2 billion in 2021, with overdue accounts payable of more than Rmb 32.8 billion.

On Gome’s future, “some investors are [giving up], while some are trying to stay confident,” said Ding Daoshi, a consumer affairs analyst at Beijing-based consultancy Sootoo Research. “Other investors are shaking.”

Video: Is the Chinese economic model broken down?